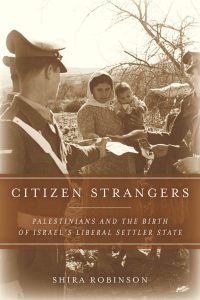 When recounting the history of Palestine, even supporters of the Palestinian struggle have a tendency to jump from 1948 to 1967, as if in the period between the first and second brutal colonisations, nothing much happened that is worth recalling.  Yet, sandwiched between these two dates are the experiences of what Ilan Pappe has called the “forgotten Palestinians”,  the 150,000 who stayed on the land after the Zionists carved out a Jewish state, taking over 425 villages and eleven cities, expelling or forcing their inhabitants to flee as they destroyed and expropriated their houses and assets.    The major powers and international humanitarian organisations only too willingly left the Palestinians remaining in Israel to their fate.  Post-1967, liberal Zionists would reflect on Israel’s first two decades as a golden age of democracy, a period of benign Zionism that was spoiled through the occupation of the West Bank and Gaza empowering right-wing settlers to turn Israel into a militarist and racist state.   Shira Robinson’s well documented history dismantles this myth.   Israel had no golden age.

On the basis of Zionist forces seizing in 1948, 78 per cent of historic Palestine, the newly founded Israeli state rapidly enacted laws to confiscate large swathes of Palestinian land.  In the early years, with Israel’s border still not fully secured, Palestinian refugees would try to return to their villages and reclaim their land.  Military rule over the Palestinians, was used to block this. Israeli leaders saw it as ‘the war on Returnees’.  Palestinians were “forbidden to move to another village or town without permission from their local governor.  Informally, they were barred from living in any Jewish colony or town, including those depopulated of their all-Arab communities and now inhabited solely by Jews.”(39)   The key elements of an apartheid system were thus put in place.  Minimising and segregating the Palestinian presence to privilege Jews over Palestinians, provoked Palestinian demands for equal treatment.  Israel nervous of this growing resistance and of international condemnation for its violent suppression of it, looked for ways of integrating its colonised subjects while keeping them powerless: “Israel’s pursuit of a working balance between incorporation and exclusion resembled the challenge that all European empires confronted in the nineteenth and twentieth centuries.” (135)  The Zionist response to this contradiction, Robinson argues, was the “liberal settler state”.   Citizenship was accorded to Palestinians but hollowed out.  Israel’s leadership made nationality not citizenship the basis on which to allocate land and financial resources, thereby entrenching in the state, Jewish supremacy.  By this device, argues Citizen Stranger, Israel’s ‘liberal democracy’ was grafted onto a regime of discrimination against the Palestinians, with the aim of keeping them ‘as divided, uneducated, and patriarchal as possible’ (139).  Although this strategy backed by imperial muscle has inflicted immense suffering on the Palestinian people, Robinson’s shows that their determined resistance has not been without successes.

Today, there are 2 million Palestinian in Israel but that is also the reason why Zionist colonisation continues within Israel’s 1967 borders principally in the Naqab/Negev and the Galilee.  Israeli citizens moving into these two regions are part of the ongoing colonisation process to push Palestinians off their land.