JNF’s Memoria Park in the spotlight 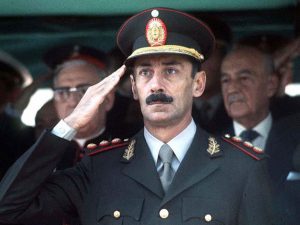 “Here there is rejuvenation not only of nature, but also of the spirit, ” said Argentine Supreme Court President Ricardo Lorenzetti on a 2017 visit to Ben Shemen Forest Park’s JNF Memoria Forest, established in Israel to supposedly honour the 30,000 Argentines who were murdered – “disappeared” – by the brutal military Junta that ruled the country between 1976 and 1983. In JNF forest in Israel, Lorenzetti called for international solidarity and cooperation in defending human rights.

KKL-JNF Latin American Department Director Ariel Goldgewicht told the distinguished Argentine and Israeli guests at the event that the Memoria Forest helped Israelis to “learn about the tragic history of that period” from “engraved stones with the names of the many Argentine Jews who were made to disappear”.

It is doubtful that this JNF forest will teach anyone about how Argentinian Jews were singled out for tortureand murder. The anti-semitic Junta leader, Videla, viewed Israel as a close military ally and by the second year of Videla’s rule Israel’s ambassador in Argentina boasted that “since the military junta came to power there has been an improvement in the relations between Israel and Argentina”. After the US Congress imposed an arms embargo on the military dictatorship, Israel quickly filled the gap and by the end of 1987 30 per cent of Israeli arms exports went to Argentina, worth $2 billion, equivalent to over $50 billion in today’s money.

In June 1981 there were 118 Argentine officers training in Israel. A letter sent by the Israeli Embassy said that  there is “no country in the world in which so many Argentine officers were staying simultaneously for the purposes of weapons procurement, training, etc.”

The Israeli Embassy refused Jewish leftists the passports that would have sprung them from the regime’s torture chambers. Torturer Peregrino Fernandez revealed that assistance in his grisly craft came from the Israel Embassy’s Herzl Inbar (later Israeli Ambassador to Spain).

High profile prisoner Jacobo Timerman wrote: “I will forget my torturers, but I will never forget the Jewish leaders who acquiesced to the torture of Jews”

According to Zochrot, Ben Shemen Forest Park sits on the ruins of the Palestinian villages of Jimzu, Dayr Abu Salama, Khirbat Zakariyya, Haditha, Khirbat al-Duhayriyya. Israeli archives show Zionist militias on 10 July reporting “Our forces are clearing the ‘Innaba-Jimzu-Daniyal area and are torching everything that can be burned.” The other villages lying under Ben Shemen Forest were similarly cleared of their Palestinian owners.

Memoria Forest covers up a crime scene – the violence that achieved the ethnic cleansing of the Palestinian villages on which it is built.  Should we be surprised that it also covers up Israel’s central role in another gigantic crime a continent away?