The JNF is a pillar of Israeli apartheid and a militant component of the Zionist coalition hell bent on the ethnic cleansing of the entire land surface of Palestine. A key part of this project involves building forests to cover scenes of crimes past – massacres and expulsions of Palestinians from their homes and villages – within the greater ethnic cleansing crime-scene that is the State of Israel.

But JNF parks and forests do more than conceal this ethnic cleansing; for additional reasons, many deserve the attention of all those committed to justice, or, at least, who want to avoid being thought to be complicit in the JNF’s crimes.

By calling one park “British Park” the JNF seek to suggest that, somehow, British people endorse the massacre and dispossession of the Palestinians whose land was taken to provide it.

The JNF Rev. Bastiaan Ader Forest similarly dishonours the memory of one who made the ultimate sacrifice to fight state-enforced racial segregation in Europe.

The JNF names its parks and forests to send a message to Palestinians as well – that Israel violates them not only with the active support of our governments, which is generally true, but that this is with the agreement of their populations – although the pro-Israel lobby knows this is very far from the truth.

JNF British Park
The policy of naming scores of JNF parks after countries from South Africa to Canada is psychological warfare, a part of the Israeli campaign to crush and disperse the Palestinian people. Stop the JNF campaigns with those whose once-thriving communities were destroyed by Zionist militias that used execution squads and rape to drive out Palestinians, then employed fire and dynamite to burn and destroy homes to prevent them returning.

The JNF-UK (Hon. Patrons Tony Blair and Gordon Brown) funded the development of the British Park upon the ruins of ethnically cleansed Palestinian villages. An insolent sign at the entrance to the park – which remains Palestinian property – reads “British Park, A gift of the Jewish National Fund of Great Britain”. Their hubris reveals the JNF UK’s criminality, that it was previously in receipt of stolen lands of the Palestinian villages of Ajjur and Zakariyya. By their own admission the JNF UK have benefitted from the proceeds of this great crime – how can they gift what they hadn’t received? – and continues to violate the rights of the Palestinian refugees, who still have legal claim under international law to the land on which the British Park stands.
The razing to the ground of a civilian community and the pillage and onward sale of the property constitutes a war crime under international law. War crimes are not subject to the rules of legal limitation. The JNF UK, in common with its counterparts worldwide, is a criminal organization in its own right and as well as being part of the larger international JNF.

JNF Coretta Scott King Forest
In addition to naming their parks after countries, the JNF covers the scenes of some Israeli massacres with anti-racism-themed parks and forests. The organization promotes the Coretta Scott King Forest as a symbol of “commitment to peace and justice” but the forest covers up destroyed Palestinian villages, including Ayn al-Zaytoun, whose inhabitants the JNF helped to kill and expel.

Walid Khalidi in All That Remains refers to a group of thirty-seven young villagers chosen at random; Israeli historian Benny Morris concludes that “these teenagers were probably among a group of seventy people later massacred in a gully between Ayn Al Zaytoun and Safad under orders from Moshe Kelman who, in anticipation of a Red Cross visit to the area, ordered their hands to be untied to conceal the fact that the killing had been done in cold blood”.

In 1976 the JNF also named a forest after Dr. Martin Luther King Jr. within the Mount Turan Forest in the Upper Galilee region, near Nazareth, which they claim later grew to include 10,000 trees.

Icons of anti-racist struggle are co-opted in the service of ethnic cleansing, for the JNF’s involvement in such crimes is both historical and ongoing.

JNF Memoria Forest
The JNF’s Memoria Forest also does double duty, covering up an ethnic cleansing of Palestinians while also concealing Israel’s sacrifice of thousands Argentinian Jews tortured and killed by the fascist junta that Israel armed and helped to train. Ben Shemen contains Memoria Forest and sits, like the scores of other JNF parks, on the ruins of ethnically cleansed Palestinian villages, in this case including Jimzu, of which Zionist records report on 10 July 1948, “Our forces are clearing the Innaba-Jimzu-Daniyal area and are torching everything that can be burned.”

While the Ayn Al Zaytoun villagers saw their killers erect an “anti-racism” themed park to conceal their destroyed homes and land, the survivors of Jimzu and other villagers saw insult piled on injury: – the Memoria Forest planted over their village is promoted as a symbol of tolerance and anti-fascism, a tribute to those 30,000 Argentines, including 3,000 Jewish citizens of that country, who died at the hands of the Argentine Junta.

The Memoria Forest visitors’ centre, however, conceals not only the history of the Palestinian villages underneath, but the sinister record of Israel’s arming and training of the military officers who carried out the mass killings of 1976-83. At the height of the Junta’s terror, the Israeli Embassy in Buenos Aires reported that  there was “no country in the world in which so many Argentine officers were staying simultaneously for the purposes of weapons procurement, training, etc.”

The Israeli Embassy refused Jewish leftists the passports that would have sprung them from the regime’s torture chambers. Torturer Peregrino Fernandez revealed much later that assistance in his work came from the Israeli Embassy’s Herzl Inbar (later Israeli Ambassador to Spain).

Prisoner Jacobo Timerman later wrote: “I will forget my torturers, but I will never forget the Jewish leaders who acquiesced to the torture of Jews”.

JNF forest dedicated to Rev. Bastiaan Jan Ader
The JNF Coretta Scott King Forest dishonours that iconic family name and the JNF nationally themed parks and forests implicate citizens of multiple countries in the crimes of the JNF. The Memoria Forest is not the only JNF park to exploit the memory of those who fought and died to oppose fascism around the world, while concealing Israeli savagery in Palestine and support for extreme-right wing regimes elsewhere.

Rev. Bastiaan Jan Ader was a Dutch resistance fighter during the Nazi occupation of WWII who rescued and hid many Jews from the Nazis. In 1944 he was planning an attack to rescue more Jews when he was betrayed, and then tortured and killed by the Gestapo. Israel’s Yad Vashem concluded that Bastiaan and his wife, Johanna, saved the lives of two to three hundred Dutch Jews.

The JNF planted a forest of 1,100 trees with a memorial stone in memory of Rev. Ader. The forest was built over the ruins of the Palestinian village of Bayt Natiff, which the Israelis reduced to rubble to prevent the return of the villagers whom Jewish militias had expelled in October 1948. Many villagers ended up in Bethlehem, in Aida Refugee Camp.

In 2016, Rev. Ader’s son, Erik, learned of the JNF’s role in the ethnic cleansing and, therefore, how the legacy of his father’s fight against the Nazi occupation regime had been incorporated into the service of Israel’s programme of ethnic cleansing: “I can’t ask my father what he thinks about his name being associated with this injustice, but knowing what he stood for, it’s not hard to guess”.

What you can do
If you oppose the JNF’s efforts to implicate citizens of your country in its crimes, if you honour the record of Dr. King in fighting against racism, if you are repulsed by Israel’s alliance with a fascistic regime and then mourning the victims it allowed to be slaughtered by that same regime, if you are inspired by the heroism of Rev. Bastiaan Ader in protecting Jews under Nazi occupation and the consistency of his son in opposing Israeli ethnic cleansing – you should support the efforts of Stop the JNF and be part of the movement to expose them for what they are: the “charity for apartheid”, in Gideon Levy’s words.

For more information or with any queries, contact:
Mick Napier, scotland@stopthejnf.org, WhatsApp/Signal +44 795 800 2591 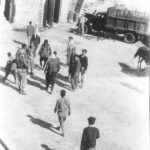 JNF anti-racism-themed forests conceal racist massacre
How does the JNF UK get away with it?