Introduction to the British Park 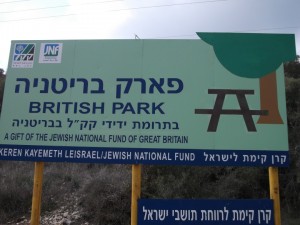 British Park: A JNF UK crime scene – ‘Not in our Name’

Many in the UK are unaware of how the JNF UK (Jewish National Fund), a registered charity, got hold of the land of seven Palestinian villages, converted it into British Park and gifted it to Israel.

After the Nakba, the JNF continued to violate international law by expropriating lands of Palestinian refugees and planting forests and parks over the ruins of their villages. In the 1950s, the JNF’s UK branch funded the planting of the ‘British Park’ over the ruins of two forcibly depopulated Palestinian villages, Ajjur and Zakariyya.

Although the JNF presents itself as an environmental organization, in fact the JNF works to exclude the Palestinian people from their land and develop segregated Jewish communities. For example, the Jewish agricultural settlement of Moshav Zecharia now sits on lands that belonged to the Palestinian village of Zakariyya.

Background to British Park – A Crime Scene Not in Our Name

Many in the UK are unaware of how the JNF UK (Jewish National Fund), a registered charity, got hold of the land of seven Palestinian villages, converted it into British Park and gifted it to Israel.

British Park is on stolen Palestinian land – the naming seeks to draw British citizens into a web of complicity with this JNF crime.

46 of the 68 JNF parks and forests are on ethnically cleansed land.

Palestine before the Nakba

Palestine was often described as ‘a land without people for a people without land,’ – a desert awaiting Zionist settlement.  In 1917, when the British occupied and began administering Palestine, a survey it commissioned revealed the country’s rich agriculture and export industry.

At a time when the Jewish population was a tiny minority, Palestinian farmers produced almost all the country’s grains and olives, along with 86% of its grapes, 77% of its vegetables and 60% of its bananas.The country also had thriving trade and manufacturing centres in Jerusalem. The data on Palestinian economic activity counters the baseless claim that Zionists made a supposed ‘desert’ bloom.

The Nakba devastated the cultural, social and economic fabric of Palestine – a disaster for thePalestinians and the region – and a situation which British rule had been instrumental in bringingabout.  (See “The Lost Cities of Palestine”)

The British role in the Zionist project

The aim of Zionism, from the outset, was to colonise Palestine and create a purely Jewish state by removing its indigenous people. This could only be carried out with the backing of an imperial power. During the First WorldWar, Britain seized control of Palestine and committed itself to the Zionist project, through the Balfour Declaration in 1917 and then through a League of Nation’s mandate, until 1948.

During this period, the British Government oversaw the movement of Jews into Palestine. It facilitated the creation of self-governing Zionist institutions and the funnelling of funds from overseas, via the JNF, for land purchases. Crucially, Britain used its military power (1936-39) to crush the Palestinian uprising against British rule and Zionist colonisation. The British deployed over 100,000 troops, bombed villages and implemented punishment executions, internment and deportation. This left the Palestinian national movement much weakened when, in 1947-49, the Zionist forces (which had received British military training) attacked Palestinian villages, evicting two-thirds of the Palestinian population.

British rule prepared the ground for the Zionist ethnic cleansing of the Nakba. Britain has continued to give support to Israel’s ongoing colonisation of Palestine.

The JNF – complicit in the crimes of the Nakba

The JNF leaders promoted the policy of driving out the indigenous Palestinians via the ‘Transfer Committee’ and, in the years leading up to the mass ethnic cleansing of 1947-49, drew up an intelligence dossier on Palestinian villages. These
‘Village Files’ giving details of access/egress routes, water resources and relationships with other nearby villages, were supplied to Zionist militias. The Files also identified real and potential leaders of resistance, using a ‘hostility index’- many of those identified laterbecame targets for assassination.  The Village Files effectively became a blueprint for ethnic cleansing and atrocities.

When Zionist fighters entered a Palestinian village selected for an exemplary massacre, men and boys were lined up and identified by a hooded informant; later they were taken away and executed. Suchprecise targeted killing of civilians known to be hostile to the Zionist project was made possible by theJNF’s painstaking prior fieldwork in Palestine. These mass killings of political opponents, facilitated by the work of the JNF, should be distinguished from the frequent massacres of men, women and children in numerous Palestinian villages that were calculated to produce terror and flight in neighbouring communities and more widely.

How did the JNF UK come to possess British Park?

In December 1948, the United Nations passed Resolution 194, establishing the Right of Return of Palestinian refugees expelled during the Nakba; Palestinians were to be allowed to go home.

To prevent this happening, the new state of Israel rapidly devised laws to “offload” ethnically cleansed land to several groups, including the JNF. By outsourcing discrimination in favour of Israel’s Jewish citizens, the state sought to give the appearance of observing democratic norms, to stave off international condemnation. It was, as Agriculture Minister Tsizling said, ‘important in the international arena, and before the world community, that what is happening here
appears legal.’ (Emphasis added)

Israel knew from the start that its ethnic cleansing and suppression of Palestinian rights to favour Jews violated international law.

The JNF sought to greenwash the ethnic cleansing, creating parks and forests ‘on land wherePalestinian villages once stood; the forests are there to conceal this.’ (Zochrot: quoting Michael Kortoza,KKL JNF)

46 of the 68 JNF developments cover Palestinian land.  British Park is one of these developments. Despite this, JNF UK, has been a registered British charity since 1939.

‘During the 50s and 60s, the JNF pressurised many Jewish families into donating money weekly to Israel. They were ignorant of the truth, that it was to establish Jewish settlers on land stolen from the Palestinians’, Linda Clair, Manchester.

Memoricide: JNF and the erasure of truth in British Park

Today, to legitimise the creation of the park, the JNF UK claims a long standing and continuous connection between the parkland and the Jewish people. Their website references Biblical narratives,such as the battle between David and Goliath. Much play is made of the park’s ‘ancient, ruined buildings, cisterns (and) caves’. There are wistful descriptions of ‘abandoned’ groves and orchards‘covered with almond, fig, olive and pomegranate’ trees (but ‘abandoned’ by whom and why?).

The JNF does not explain that Palestinians, for centuries, lived in the now ‘ancient, ruined buildings’, cultivating the land, making and trading goods and produce. There is no mention that the prickly-pear cacti found in the park delineate the boundaries of their villages.

And, of course, there is no acknowledgement that these villagers were ethnically cleansed from their homes and land by Zionist forces in 1948.

Is British Park an injustice of the past, irrelevant today?

The lives of Palestinians today are still being impacted by all the Zionist crimes of the past: their inalienable Right of Return is still being prevented; huge numbers still live in refugee camps.  Meanwhile, plundered property has never been returned; those who owned and worked their lands before the Nakba are often not even able to visit their ancestral homes, let alone reclaim their rightful lands. 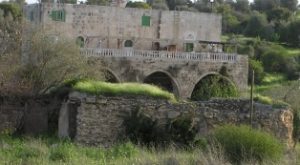 Ajjur is under British Park and is a good example of ongoing loss. Once, it was a thriving village, dating back centuries, with profitable, sustainable agriculture, two masjids, and schools. It was a market for the region and offered residents a good living, in harmony with the land and climate. Now its residents are refugees, living in exile.

And the expulsion of Palestinians continues: the JNF has recently announced that it will acquire lands in occupied East Jerusalem and the West Bank, in flagrant breach of international law, a harbinger of yet more ethnic cleansing.

Britain and the JNF today

As in the past, the British establishment shields the JNF. It still has charitable status, despite detailed and evidenced cases to the Charity Commission and the Fundraising Regulator proving the JNF’s work is far from charitable, but instead is ‘100% Israel’ (to quote JNF UK’s own publicity).

Yet, JNF UK picks up 25% Gift Aid and remains an official branch office of the worldwide KKL JNF, as their website shows.

Part of a Charity Commission response to a complainant who asked that the JNF UK’s charitable status be removed:

‘In simple terms, the test of charitable status is a test of what an organisation was set up to do, not what it does in practice.’  (June 2019)

Kholoud Al Ajarma is Palestinian refugee who submitted her family’s title deeds to land under British Park. She was denied ‘standing’, the right to take her case further, as documented by Jonathan Cook. Complaints to OSCR (Scottish Charity Regulator) and the Fundraising Regulator have fallen on deaf ears.

The villages under British Park

What you can do

The JNF was established in 1901 to “redeem” Palestine from “foreigners” (meaning the indigenous Palestinians) by acquiring land, moving Jewish settlers onto that land and keeping it exclusively for the benefit of Jewish people in perpetuity.

British Park was developed by the JNF UK over the ethnically cleansed lands of 7 Palestinian villages.  It was then gifted to Israel. The Park greenwashes the ethnical cleansing of the original inhabitants and seeks to prevent their return.

The name of British Park makes UK citizens unwittingly complicit in acts of ethnic cleansing and in the erasure of historical truth.

British Park is not unique. The world-wide JNF organisation has funded many parks and forests on ethnically cleansed land: 46 of the 68 JNF parks or forests are on stolen Palestinian land. These developments are often named after eminent individuals or countries. (e.g. The Coretta Scott King Forest; Balfour Forest; South Africa Park.)

The JNF UK was a registered charity when it developed British Park and remains a charity to this day, benefiting from 25% Gift Aid. Individuals who supported the JNF UK are memorialised within British Park; Jewish communities around the world are encouraged by the JNF to commemorate deceased relatives with donations towards tree planting. It is one of the ways the JNF seeks to bond Jewish people to the Zionist project.

The Stop the JNF British Park campaign is not confined to one historic crime.  Today, the JNF remains faithful to its political ideology and acts to advance it. Recently, the JNF announced its intention to openly acquire swathes of Palestinian property across the Green Line in flagrant breach of international law. The JNF is also active in the Naqab, where  Bedouin people are being forcibly transferred, and are involved in enforced evictions in occupied East Jerusalem.

This campaign pledges to amplify the call for justice of our Palestinian partners – many of whom are refugees whose real home lies under British Park. Together, we assert their Right of Return, reject the JNF and will work to have its charitable status removed.

British Park is Not in Our Name