The Struggle against Climate Apartheid in Palestine – by Manal Shqair. 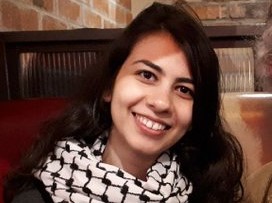 Manal Shqair is campaigns coordinator for Stop the Wall and international outreach coordinator of the Land Defences Coalition, colonized Palestine. Stop the JNF is working with the Palestine COP26 Coalition and its members in solidarity campaigns around COP26 and to support their tree planting initiatives.

In our ever-heating planet, the causes and impacts of climate change are [to a certain extent] known. What has also become evident is that many aspects of the response to the climate crisis are fostering discrimination and exclusion of the historically and systematically marginalized ‘other’. This only entrenches a system of climate apartheid.

As a network of Palestinian grassroots and environmental organizations, the formation of the Palestine COP26 Coalition (PCC) is an expression of our struggle to fulfill a radical dismantling of the apartheid system Israel imposes on us, including climate apartheid.

Established in 2020, the PCC is comprised of the Palestinian Environmental NGOs Network, which represents the Palestinian chapter of Friends of the Earth International; Stop the Wall Campaign, the Popular Struggle Coordination Committee, Palestine Institute for Biodiversity & Sustainability of Bethlehem University and the Palestinian Farmers Union.

We have come together in one coalition to get the best of our long-standing experiences in the struggle to preserve our environment and presence as a people, identity, history and culture in the face of Israeli onslaught on our existence and ecosystem and convey the systematically silenced Palestinian voices through the spaces enabled by the People’s COP26 Coalition based in Glasgow.

The presence of Palestine in this global bottom-up transformative space is part of our efforts to emphasize that finding solutions to climate change must include and strengthen indigenous environmental stewardship. This is because the environmental destruction we confront in Palestine and globally is deeply rooted in racism, colonialism and sexism.

The destruction of our environment caused by Israeli apartheid practices is a precondition for the colonization of our land and the destruction of our society. Despite this, Israel promotes itself as a pioneer in technological advancement through which it claims to find solutions to the climate crisis, which is a racial supremacist act pursued by colonizing powers to undermine and devalue the knowledges and cultures of the colonized peoples.

Since the occupation of the rest of Palestine in 1967, Israel has uprooted about two million trees to pave the way for the colonization of Palestinian lands to build Jewish-only settlements, apartheid bypass roads and the Apartheid Wall. Israel has caused detrimental environmental destruction not only by uprooting trees and destroying Palestinians’ agricultural lands, but also by planting non-native and ecologically inappropriate trees that do not fit our ecosystem to cover up Palestinian villages destroyed in 1948 when Israel was born. The trailblazer in this through which Israel greenwashes its apartheid practices is the Jewish National Fund.

Amidst the war Israel and its institutions have been waging against us and our environment, we never stand still or passive; rather, as we seek to reclaim our colonized land and preserve the tiny bits of it that are still in our hands, we counter Israeli practices to uproot us and our trees from our ancestral lands by planting more trees, especially in areas threatened by Israeli ethnic cleansing like the so-called Area ‘C’.

The cultivation of trees is one alternative among others through which we try to counter Israeli colonization and environmental damage. Tree planting, mainly native trees like olive trees, strengthens the connection which Israel aims to break between Palestinians and their land through subjecting Palestinian farmers to different forms of violence.

We see in the People’s COP26 Coalition a space through which the PCC can share Palestinian anticolonial practices that regenerate the environment with other oppressed groups involved in this space; whom we also aspire to learn from their experiences. This mutual approach of acquiring knowledge that we in the PCC strongly believe in asserts that we should live in the planet based on sharing because no one should be rendered expendable; rather, all life matters and indispensable.

Manal Shqair is campaigns coordinator for Stop the Wall and international outreach coordinator of the Land Defenses Coalition, colonized Palestine.

Stop the JNF is working with the Palestine COP26 Coalition and its members in solidarity campaigns around COP26 and to support their tree planting initiatives.