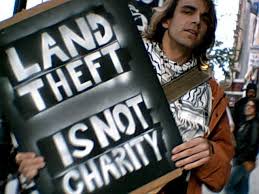 This Thursday, the Jewish National Fund (JNF) is having a fundraiser for an 8 KM hiking and biking trail in Canada Park “in honour of all IDF soldiers who have been held in captivity.” Canada Park is built on the ruins of Imwas, Yalu, and Beit Nuba which were located in the West Bank and destroyed after the 1967 war.

We will be standing outside the Tatoo Rock Parlour, where the event is being held, to give the other story: according to Addameer, the Prison Support and Human Rights Association, as of January of this year (2014), there are 5,023 Palestinian prisoners, including 17 women, 155 held in administrative detention, and 154 children (14 under the age of 16*). According to the UN estimates, over 750,000 Palestinians have gone through the Israeli prison system since 1967.**

We will be honouring Palestinian prisoners and remembering Imwas, Yalu, and Beit Nuba, whose ruins are still visible in Ayalon/Canada Park.

Brought to you by Stop the JNF, Canada and Independent Jewish Voices (IJV), Toronto

See the joint Stop the JNF/IJV postcard to the Minister of National Revenue, Kerri Lynne Findley, asking her to revoke the JNF’s charitable status in Canada here, where you can either download for printing or email Stop the JNF, Canada or IJV for postcards.