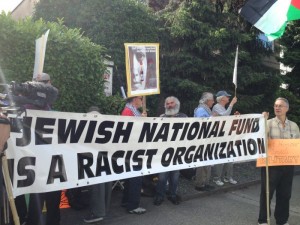 On April 6, 2014, the Jewish National Fund JNF Pacific Region is holding its annual “Negev Gala Dinner”. The JNF is publicly claiming to be enhancing the environment and aiding underprivileged youth, this year in conjunction with Canadian Friends of Hebrew Univ. of Jerusalem (also built on stolen Palestinian land). Meanwhile, they are working to ethnically cleanse the Palestinian Bedouins from the Negev region, most recently under the infamous Prawer Plan. “The bill is another nakba,” MK Taleb Abu Arar said, talking about the Prawer Plan and referring to the events of 1948 when Israel was established. “It’s based on hatred and racism.”

The Bedouin village of Al Araqib in the Negev has been destroyed 62 times by Israeli and JNF paramilitary forces (as of Nov, 2013), but the Palestinians of the village refuse to surrender, many of them returning time and time again to rebuild. March 30th is also Palestinian Land Day and the villagers of Al Araqib are a moving example of the Palestinians’ enduring attachment to their land.

More info at: Stop the JNF