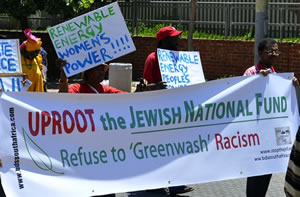 With COP17, the United Nations Climate Change Conference, taking place in South Africa we’ve been approached by several environmental justice organizations regarding the Jewish National Fund (JNF) and its presence at COP17.

The JNF potrays itself as a “green” organisation but at the same time it is involved in human rights abuses against the Palestinian people – including house demolitions and forced removals. Furthermore, the JNF administers 13% of Israeli land (which it bans Palestinians from using) and jointly (with the Israeli Land Authority, an Israeli government body) administers another 80%. Israeli land policies are discriminatory and the JNF is intimately involved (and complicit) in maintaining and administering these policies. Attached are two brief pamphlets on the JNF.

The direction coming from the Palestinian branch of the global environmental network, Friends of the Earth International, is clear: “The JNF is an organisation with explicitly racist aims of conquest. We call upon all those committed to environmental justice to cease and refrain from working with the Jewish National Fund”.

The STOPTHEJNF campaign is a worldwide campaign, led by Palestinians as well a group of Jews who refuse to identify with the JNF or the policies of the State of Israel. The campaign has been very successful in challenging the JNF:

– Human Rights workers in the United States (US) have launched an application with the US Internal Revenue Services to immediately investigate and revoke the JNF’s charity status. They contest: “the JNF funds activities that are both contrary to the public policy of the United States and inconsistent with activities of a charitable or environmental organization.”

– Earlier this year, Friends of the Earth (FoE) in Scotland fully endorsed the StopTheJNF campaign

– In February, the legendary folksinger, Pete Seeger, publicly distanced himself from the JNF

– A few months ago the British Prime Minister, David Cameron, withdrew his patron status from the JNF

Strength to our friends in the environmental justice community who will be in Durban this week!