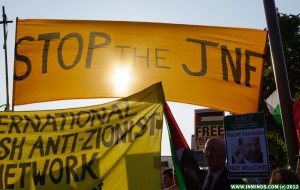 Lieberman is a vicious thug who has to meet in secret to avoid protests against Israel’s disgusting crimes.

Lieberman is leader of the far-right Yisrael Beiteinu Party and is in the same mould as Serbian war-criminals Karadzic & Milosevic in advocating mass murder by “drowning Palestinians in the Dead Sea.” He is a former member of Kach, an illegal terrorist organisation in the US & Israel. The Israeli journalist Gideon Levy said of Lieberman that he “and his soldiers are borne on the tides of hatred for Arabs, hatred of democracy and the rule of law, and the stink of nationalism, racism and bloodthirstiness.”

Lieberman proposed the  ‘loyalty oath’ legislation passed by the Knesset and branded ‘fascist’ by one of his own cabinet colleagues. When asked about Gaza he said,

“There is no humanitarian crisis in Gaza…Israel is conducting itself in the most humanitarian manner, and is allowing the entrance of thousands of tons of food and equipment to Gaza.”

The JNF’s hosting of Lieberman reveals their commitment to the Israeli government’s racist policies of ethnic cleansing & house demolitions. Since 1901 the JNF has been financially supporting the Zionist project of colonisation, apartheid & occupation in Palestine.

Despite the JNF’s activities within Israel’s state structures it enjoys charitable status in the UK and tax breaks on donations. Seventy MP’s recently signed an Early Day motion calling for this situation to end. Last week the Scottish TUC joined Friends of the Earth & the Green Party in condemning the actions of the JNF; it is now time for the Charity Commission to act.  Until they act, it is up to supporters of Palestinian human rights to actively oppose the racist JNF.