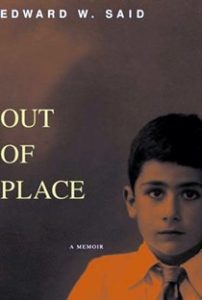 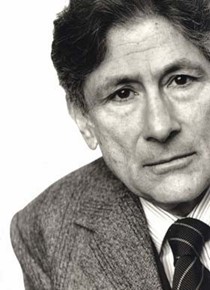 Said’s film shares the central concern of Salman Abu Sitta’s talk of February 6th- the longing to return to a home one was forced to flee from and the sense of burning injustice at being prevented from doing so. It extends and exemplifies what he wrote in a piece for The London Review of Books in February 1984, “Permission to Narrate”, written after the 1982 Israeli invasion of Lebanon and complicity in the Sabra and Chatila massacres and also a title that sums up the refusal of the so-called Free World to allow the Palestinian narrative to be heard.

In this fifty-minute film made in 1998 – fifty years after the Nakba – there is no mention of the JNF as such, but its shadow falls over many of the issues discussed by Said and the activities it is still practising are seen to have been present then. It’s an emotional film, starting in the school where his grandfather had played cricket and finishing with Said, looking at the ground, shaking his head in bewildered disbelief.

He deals with the issues of land seizure and ownership, of the impossibility of Palestinian building permits, of the tragedy of Oslo and its hopelessly defeatist division of the West Bank, at a time when these issues were even more ignored in the world outside than they are now.

He stands outside what was his family’s home in Jerusalem, film of the present intercut with pictures of his family members in the garden. His father and grandfather had been born there, his mother hailing from Nazareth, but the family was forced to flee in 1947 and a Jewish family had taken it over. Said just mutters the word “unfair” to describe this; his American-born son, accompanying him, wonders why they can’t get it back. This question goes unanswered.

Immediately one thinks of the Sumarin family, currently fighting to retain their property in Silwan, trying to resist being driven out, being hounded by the JNF surrogate Himnuta and the Abramovich-funded Elad Settler movement.

Said visits Deir Yassin and speaks to a woman who had 25 members of her family killed in the village by a Jewish militia in April 1948. A youthful Ilan Pappé, interviewed, confirms that historians could now show that Palestinians had left their villages because they had not the means to defend them against such massacres and not because the Arab countries had told them to, a myth that at the time of the making of the film had only recently been rebutted.

In snatches of conversation with another Palestinian who had left for the USA, Ibrahim Abul Linghod, Said recounts how the Israeli victory in June 1967 had been a shattering blow to those who had felt that they were just waiting to return to their rightful homes and land and saw in the defeat, a crushing blow to these hopes. He had also been shocked by the racism of the US media in their coverage of the “war”, so much so that he wrote “The Arab Portrayed” to counter it. Other conversations with figures like Mahmoud Darwish and Daniel Barenboim give to the film a cultural element not often found, though the most radical of his interlocutors is Israel Shahak who refers to “annexation, apartheid and stolen land”. He also sums up the Oslo Accords as part of the process of joining the Palestinian Authority to the Israeli Government as parts of the same system.

These criticisms have become commonplace now, but I don’t believe that they were then, just five years after the documents were signed. The choice of “apartheid” as the word that best sums up the social situation between the river and the sea, alongside the pithy and cogent definition of this as “demographic separation without sovereignty” showed Shahak to have been as clear-sighted as he was fearless.

In a talk to a Palestinian audience during the visit, Said spells out his prescription: mass mobilisation for non-violent resistance. Palestinians could not prevail in an armed struggle, even if they could procure the arms, but they did not have to “construct failure” he asserted, in a memorable phrase.

In a discussion with a number of young Palestinian citizens of Israel, he hears them say that they have no intention of leaving what, post-1948, is known as Israel but they are not going to accept second-class citizenship either.

By this time, 1998, Said knew that he was suffering from an incurable leukaemia and probably had only a few years to live. For him, the film was overwhelmingly saddening; the Palestinians were utterly defenceless, had no voice, no hope of just treatment. At times, his own voice trails away and he seems close to tears, as if lost for words. There is a sense of a simple, strong, humanity when he appeals to individual IDF soldiers to think about what they are doing. And, in 1998, all this is before the “Separation Wall”, the endless checkpoints that his journey then was not subject to, the Nation State Law that spells out to Palestinian citizens of Israel that they are, indeed and de jure, second-class citizens, the moving of the US embassy to Jerusalem in defiance of International Law, and so on.

For us now, looking back the twenty-three years since the making of the film, the issues are the same. We are bringing them out into the open in our campaign to stop the JNF: the charity for ethnic cleansing, for a faux environmentalism to obscure and hide numerous crime scenes. Its “charitable” status in the UK is a mockery of what the word is supposed to mean.

Thanks to Said and many others, the Palestinians do have a voice, both their own and through their worldwide support. The tide is turning.