“The Sumarin Family, the ethnic cleansing of East Jerusalem and the JNF.” Webinar Tuesday October 27th at 6.00pm London time.

REGISTER FOR THIS WEBINAR HERE: 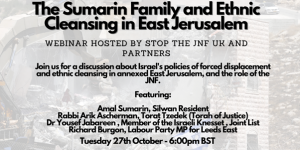 Since occupying East Jerusalem in 1967, Israel has imposed policies to drive Palestinians from the city, including through home demolition, eviction and forced displacement. Amal Sumarin, and her extended family face eviction from the home they have lived in for decades in Silwan, East Jerusalem.  The eviction is being pursued in the Israeli courts by Himanuta, a subsidiary of the Jewish National Fund. JNF UK has charity status in this country.

The attempted eviction of the family has caused international outcry, including in the UK, with a cross-party group of 71 MPs endorsing Early Day Motion 529 condemning the eviction, and urging the UK government to uphold human rights and international law.

Amal Sumarin will be joined by Israeli human rights activist Rabbi Arik Ascherman of Torat Tzedek, Dr Yousef Jabareen, Member of the Israeli Knesset (Parliament) for the Joint List, and Richard Burgon, Labour Party MP for Leeds East.  The speakers will describe why the Sumarin family case is of importance across all of occupied East Jerusalem and internationally and will set the actions of the JNF in a political and historical context.