On Thursday 21st March, International Day for the Elimination of Racial Discrimination, Palestine solidarity activists handed over a copy of the Stop the JNF application to the Charity Commission to remove JNF UK charities from the register. 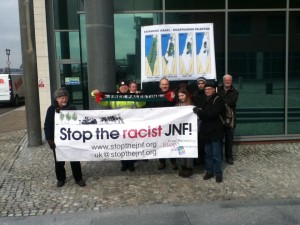 On Thursday 21st March a delegation of twelve people mostly from Liverpool Friends of Palestine gathered together on Princes’ Parade. Their aim was to hand in a document to the Charity Commission.

Similar delegations were at Charity Commission offices at Taunton, London and Newport. 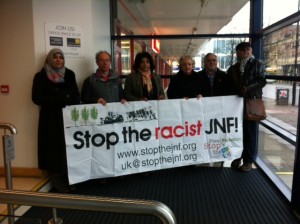 Palestine supporters from South Wales presented several petitions to Harry Iles at the Charity Commission offices in Newport on Thursday, as part of a nationwide campaign to call for the racist JNF to have its UK charity status revoked. We were welcomed into the offices by Mr Iles who had been expecting us and invited to state our position. We did so briefly and were told that our submission would be considered by the CC lawyers and that we were welcome to add any further material like JNF fundraising leaflets to our petition if we wanted. 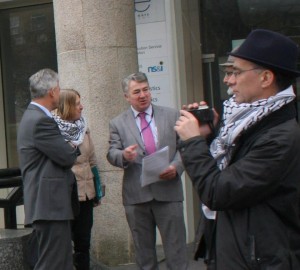 London
Campaigners from various groups, including Jews for Justice for Palestinians and International Anti-Zionist Network stood with the Stop the JNF banner at the London office of the Charity Commission. 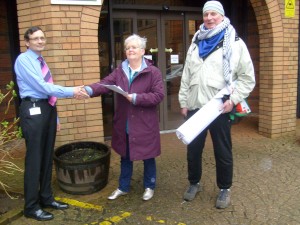 Taunton
They were expecting us!  A very helpful security chap let us in and asked us if we were anything to do with the “petition” across the country. Neil Robertson came down from the Charity Commission office to receive our submission.

Photo (above): Neil Robertson of the Charity Commission, Taunton, receives the submission from Sharen Green from Stop the JNF watched by John Burbage 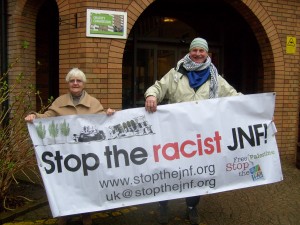 Photo (right):  Jean Franklin from Wimborne and John Burbage from Sherborne at the Charity Commission, Taunton.