“Ethnic cleansing is a crime – justice now in Palestine!” Chanting with great energy and exuberance, the Philadelphia Coalition for Boycott, Divestment, and Sanctions against Israel (Philly BDS) was once again a colorful and vocal presence in protest at the annual local fundraiser for The Jewish National Fund. 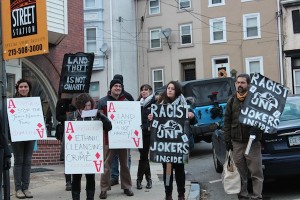 This year’s JNF fundraiser, “March Madness Poker Tournament” was held in the Philadelphia neighborhood of Manayunk on Thursday, March 21. Under the banner “STOP THE JNF’s APARTHEID ROYALE,” members of Philly BDS and allies costumed themselves as playing cards bearing the words “Stop the JNF!” Carrying signs reinforcing their message “Land Theft is not Charity,” protesters positioned themselves strategically on both sides of the driveway entrance to the event. Informational postcards and conversation were available to attendees and passers-by. 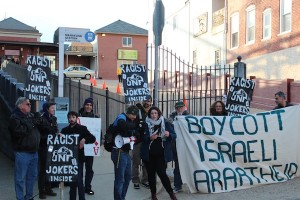 Palestinians from their homes. Since 1948, the JNF was re-branded as an environmental organization focused on forestation, while inflicting environmental devastation through fires, bulldozers, and pesticides in order to cover up Palestinian history. Each year, the JNF raises over $60 million in the United States alone. Despite its role in ethnic cleansing and apartheid, the JNF continues to enjoy charitable status.

“Protesting the JNF makes a slam dunk case for apartheid within Israel,” said Nathaniel Miller, longtime activist and founding member of Philly BDS. “Acquiring land and property rights exclusively for Jewish Israelis is an unambiguous example of Israeli apartheid and makes the case for the need to respond to the Palestinian call for boycott, divestment and sanctions against Israel. Philly BDS challenges the JNF to end its racist policies. We are committed to ending the occupation, full equality for all people of Israel-Palestine, and the Right of Return for refugees.”

Today’s protest is in support of the international “Stop the JNF” campaign that has been gaining ground in the UK, Europe and elsewhere. “We must work to revoke the tax-exempt charitable status of the JNF,” adds Miller.

The Philly BDS consumer boycott targeting Sabra Hummus and Tribe Hummus is directly connected to the JNF. Tribe Hummus is owned by Osem foods, a company that contributes its profits to the Jewish National Fund. Since launching its campaign targeting Sabra Hummus and Tribe Hummus in October 2010, Philly BDS continues to stand for justice with Palestinians by responding to the 2005 Call for Boycott, Divestment, and Sanctions against Israel until it meets it obligations under international law.