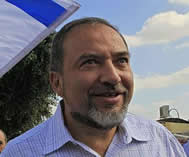 Protests are expected this evening at a Jewish National Fund (JNF) event that has controversial Israeli Foreign Minister Avigdor Lieberman as guest speaker.  The JNF failed in its efforts to keep the venue secret.  Terry Gallogly, of the UK Stop the JNF Campaign, said that the secrecy “shows clearly they understand that support for Israel, and the continuing role of the JNF in the dispossession of Palestinians is making them a toxic brand, that the JNF has lost its cover of being an ‘environmental charity’, and is now increasingly associated with a racist apartheid Israel”.

The JNF is also facing criticism from organisations such as the Movement for Reform Judaism who are “surprised and dismayed” at the decision to host Lieberman. A Liberal Judaism spokesperson has already stated that “it cannot support the invitation”.  Lieberman, a member of a far right political party, has publicly stated that “it would be better to drown these [Palestinian] prisoners in the Dead Sea” and added that he would willingly supply buses to take them there.  Israeli journalist Neve Gordon, says that “Lieberman’s message and style are not only violent, but have clear proto-fascist elements; and, as Israeli commentators have already intimated, he is extremely dangerous”.

The past year has seen an increase in uneasiness about the JNF and its role in Israeli government policy of discrimination against non-Jews, particularly in the destruction of Palestinian Bedouin villages in the Negev, the forced removal of the villagers to what campaigners refer to as a process of concentration and their replacement with Jewish-only settlements.

Michael Kalmanovitz of International Jewish Anti-Zionist Network said that “the JNF’s constitution is explicitly racist – it states that land and property will never be rented, leased or sold to people who are not Jewish”. Campaigners have called this process ‘ethnic cleansing’ and point to the effective subsidy of the JNF’s activities through its charitable, tax-exempt status here in the UK.

The Scottish Trades Union Congress is the latest organisation to support the campaign against the JNF and call for an investigation into its charity status.  Organisations that have taken similar positions include the Green Party of England and Wales, the Scottish Green Party and Friends of the Earth Scotland.

Following David Cameron’s resignation last year as honorary patron of the JNF, the first time in the history of the JNF that a British Prime Minister has not held this position, sixty-eight MPs signed an Early Day Motion stating that “there is just cause to consider revocation of the JNF’s charitable status in the UK”.

NOTE TO EDITORS
1.       The Stop the JNF Campaign is an international campaign aimed at ending the role of the Jewish National Fund (Keren Kayemet LeIsrael) (JNF-KKL) in:
– the on-going displacement of indigenous Palestinians from their land
– the theft of their property
– the funding of historic and present day colonies, and
– the destruction of the natural environment.

The Jewish National Fund was established in 1901 by the World Zionist Organisation and mandated to obtain land for the sole use of persons of ‘Jewish faith, race or ancestry’. It was first registered in the UK, and has retained a fundraising and propaganda function in Britain since the establishment of the Jewish state in 1948. Through its landholdings and its influence on the Israel Land Authority, the JNF controls 93% of the land in Israel on which it practices its ethnic exclusion policies.
The JNF continues to serve as a global fundraiser for Israeli ethnic cleansing, occupation and apartheid. Despite its role in a State institution of Israel (the Israel Land Authority) and in institutionalized racism and apartheid, the JNF and its affiliate organisations enjoy charitable status in over 50 countries.

10. Early day motion 1677, JEWISH NATIONAL FUND, Session: 2010-12
“That this House welcomes the Stop the Jewish National Fund (JNF) Campaign launched on 30 March 2011 by the Palestinian Boycott National Committee, the International Jewish Anti-Zionist Network, Scottish Palestine Solidarity Campaign and others to inform the public about the JNF – Karen Kayemet L’Yisrael, its ongoing illegal expropriation of Palestinian land, concealing of destroyed Palestinian villages beneath parks and forests, and prevention of refugees from returning to their homes; notes that the JNF’s constitution is explicitly discriminatory by stating that land and property will never be rented, leased or sold to non-Jews; further notes that the UN rejected the JNF USA’s application for consultative status with the Economic and Social Council on the ground that it violates the principles of the UN Charter on Human Rights; regrets that the Prime Ministeris a JNF honorary patron; and believes that there is just cause to consider revocation of the JNF’s charitable status in the UK.”
http://www.parliament.uk/edm/2010-12/1677

11. The JNF in the Negev (Naqab)
‘Shattering Israel’s image of ‘democracy’’, The Guardian, 3 December 2009
http://www.guardian.co.uk/commentisfree/2009/dec/03/israel-negev
‘Cameron-backed charity accused of discriminating against non-Jews’, 10 June 2010
http://www.jnews.org.uk/news/cameron-backed-charity-accused-of-discriminating-against-non-jews
‘The Israelis keep bulldozing their village, but still the Bedouin will not give up their land’, The Guardian, 1 March 2011
http://www.guardian.co.uk/commentisfree/2011/mar/01/israelis-demolish-bedouin-village
‘Stop creating forests that are destroying Bedouin lives’, Amnesty International, 11 April 2011
http://www.amnesty.org/en/appeals-for-action/stop-destruction-bedouin-village-and-its-inhabitants%E2%80%99-livelihoods-5