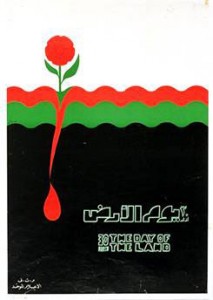 On March 30th, 1976 Palestinians went on general strike and held non-violent marches and protests in response to an Israeli announcement that the state would be stealing more land from Palestinian citizens of Israel. Israel reacted to these non-violent actions with deadly force.  Six Palestinians were killed, hundreds wounded, and many more jailed.

March 30, now known as Land Day, has become an annual commemoration of that day. It is a day to not only remember those killed in 1976 but to mourn the loss of land and those who died defending the land from the time of the earliest Zionist colonizers.

March 30 is also the anniversary of the launch of the Stop the Jewish National Fund (JNF) Campaign in 2011 (www.stopthejnf.org). Stop the JNF is an international campaign aimed at ending the role of the JNF (or in Hebrew KKL – for Keren Kayemet LeIsrael) in its on-going displacement of Palestinians from their land, the theft of their property, its cover-up of both, its funding of historic and present-day colonies, and the destruction of the natural environment.

In one year the StJNF Campaign has made enormous strides:

1 file(s) 4.81 MB
Download
.
– We launched a campaign petitioning the IRS to end the tax exempt status of the JNF.
– David Cameron, the British Prime Minister, ended his status as “Honorary Patron” of the JNF.
– We launched “Plant a Tree” in Palestine to replant indigenous, life-sustaining trees.
– We sent a fact-finding delegation to Palestine and met with families impacted by the JNF.
– Environmental justice, indigenous rights, and labor groups world-wide endorsed the campaign.

And we can do so much more if you join us! Get involved today:

– Sign onto the Stop the JNF campaign call-to-action
– Sign the IRS petition
– Plant a tree in Palestine
– Sign onto a petition to demand Palestinian access to water, including putting a stop  to the JNF’s role in stealing Palestinian water
– Bring the campaign to your location, email us at us@stopthejnf.org
– Watch, share and post the following videos that expose the role of the JNF across Palestine:
– al-araqib: the role of the JNF in today’s forced displacement of the 100 plus year Bedouin community living in the Negev
– silwan: a documentary about today’s displacement of Palestinians in Silwan, a place where the JNF is playing a significant role