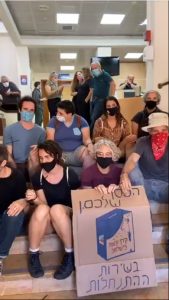 (Above: Activists from Free Jerusalem and All That’s Left blockaded the entrance to KKL-JNF headquarters in Jerusalem on the day of the Sumarin Family’s court hearing)

Yesterday (05/08/2020) the Israeli Supreme Court stayed the eviction of the Sumarin family from their home in Silwan, occupied East Jerusalem, declaring it will debate whether to hear their appeal against a Jerusalem District Court verdict which gave a green light to their eviction. The Associated Press reported in July that the “Absentee Property Law” being used to evict the Sumarin family may be seen as a test case and extended throughout the West Bank if Israel’s annexation plans proceed,  offering Palestinians  a grim model for a post-annexation future.

The Sumarin family have been subject to a long attempt to force them from the family home in which they have been living, dating back long before 1967, when Israel annexed East Jerusalem in violation of international law.

The eviction attempts have been spearheaded by Himanuta, a subsidiary of the Jewish National Fund (KKL-JNF). The KKL-JNF has been central to the ongoing dispossession of the Palestinian land.

In 1989, KKL-JNF initiated a move whereby the Custodian for Absentee Property, established by the Israeli state in 1950, declared the house absentee property. This deemed it abandoned without the family’s knowledge and despite members of the family living in the home. Following this, the property was transferred to KKL-JNF along with a host of other Palestinian properties in Silwan.

Immediately after taking over the home’s ownership, the KKL-JNF filed an eviction suit against the Sumarin family in 1991. The lawsuit was dismissed but KKL-JNF appealed and continued the proceedings repeatedly for nearly 30 years.

On June 29th, 2020 the family lost an appeal in the Jerusalem District Court, which gave the green light for their eviction. The family, with support from an international network of activist, crowdfunded to submit an appeal to the Supreme Court. The court’s declaration that it will hear the appeal temporarily delays the eviction.

An international campaign, led by the Sumarin family and including Jewish Israeli groups, has developed to prevent the eviction. In the UK, human rights campaigners have spoken out prominently against the eviction. A cross-party group 69 MPs has signed Early Day Motion 529, which condemned the eviction. In Jerusalem, on the day of the court decision, activists from “Free Jerusalem” and “All That’s Left” chained themselves to the entrance of the JNF-KKL headquarters: nine protesters were arrested.

Stop the JNF UK, the UK branch of the international campaign to Stop the JNF, said: “We are pleased that the Sumarin family have been given some temporary reprieve by this decision. The unjust eviction of the family, indicative of the widespread discrimination Palestinians in East Jerusalem face, must not take place.”